St. Mark's is part of the Church of England, in the Diocese of Carlisle and has a regular worshipping congregation of approximately 100 people. The Church itself is situated Barrow's town centre and has a parish encompassing around 1800 homes and half of the town centre shops and offices. It is predominantly a working class parish with a wide mix of ages. Built in 1878 to serve the expanding population of the Town, it is still dedicated to helping local people find the love of God for themselves.

Barrow-in-Furness is a Victorian town of South Cumbria, situated on the southern tip of the Furness Peninsula, only 20 minutes from the Lake District. It's the second largest settlement in Cumbria. The web site Visit Cumbria has some interesting facts and pictures on Barrow today and it's colourful history also pay a visit some of the sites listed on our Links page. 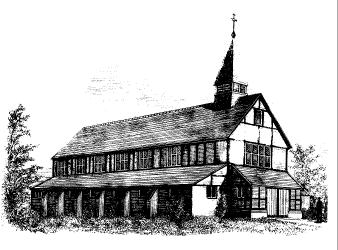 St. Mark's is a Victorian, wood and red brick built structure opened in 1878. It was originally designed as one of four temporary Churches to meet the spiritual needs of a rapidly growing industrial town of the late nineteen century. Due to the numbers attending the building was soon enlarged by the addition of the south Aisle taking the available seating at the time to a little over one thousand.

After consultation with our architects during 1987 it was concluded that the building was still structurally sound and no advantage could be gained by demolishing the Church and rebuilding anew. Thus began a major refurbishment of the Church buildings which externally saw the front Porch and Steeple removed. Internally a wall was built across the existing worship area to create at the Church entrance a Meeting Room to seat fifty people, a Foyer of equal size, Kitchen and Toilet facilities and further large Meeting Room above both the Foyer and Lower Meeting Room.

With the pews removed two hundred cushion seats were installed. A further two hundred chairs can be added to the main Worship Area/Foyer for larger Services/Events. The cost of this refurbishment was met partly from the sale of redundant Church Halls but mainly from the giving of Church Members themselves.

Carpet is used throughout the building except for the Church Hall which is mainly used for Sunday School and Uniformed Organisations. The Worship area chairs are completely removed when necessary for example youth events or the monthly Messy Marks.

A portable wooden Font is used for Baptism, the Church's original stone Font now stands in the Foyer next to a War Memorial. The Pipe Organ was constructed by Brindley and Foster and subsequently refurbished in 1964. It resides in the South Aisle of the Church and has two manual keyboards, one pedal board and approximately 1700 pipes.

Wheelchair access is available to all parts of the building excluding the Upper Meeting Room which is mainly used by the three to seven olds of Sunday School on Sundays. A Disabled Toilet is included in the main Toilet facilities.